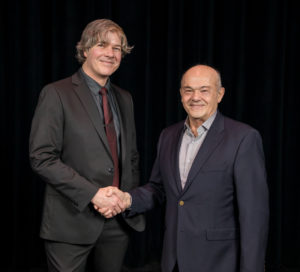 Jeff has been with the agency since 2016 and recently earned his Associate Broker’s license. Chuck Bartolo said, “from very early in Jeff’s real estate career, Jeff has always been willing to extend a helping hand to any agent in the office who needed it. He’s smart, tech-savvy and committed to helping new agents overcome the challenges they face when entering the profession.”

In his new role as Sales Manager, Jeff will be responsible for supervising agents and providing them the resources and support needed to sell or lease properties. Jeff’s appointment increases Beach & Bartolo’s in-office support team, which, in addition to Chuck Bartolo, also includes a full time Office Manager, and an Office Assistant.

Beach & Bartolo Realtors, voted “Best Real Estate Company” in Columbia County for four consecutive years, has been in business for 58 years. With 20 agents in their office, Beach & Bartolo is one of the largest independent brokerages in the region.

The Ghent Playhouse presents, ‘Last Train to Nibroc’, running weekends from May 20 through June 5, 2022.

In person craft meetups are back at the the New Lebanon Library!

Mother’s Day Specials at Chatham Brewing on Sunday, May 8th.

Staged Reading ‘For the People’ at The Theater Barn in New Lebanon, May 7

HRC Showcase Theatre is presenting a Staged Reading of ‘For The People’ by Carol Mullen, at The Theater Barn, in New Lebanon, on Saturday, May 7th.